When Ginyu and Jeice heard Vegeta’s words, they became so angry. They just got ready to contact Frieza, but the two guards came and snatched their detectors.

“Hey!” Ginyu just yelled and the detectors were destroyed in front of them.

“Vegeta, you just wait for me, you despicable!” Ginyu and Jeice almost jumped up, but their stomachs were too hungry, and they have no strength in their body’s.

A guard gave a slap on the head of Ginyu and shouted: “Be civilized, he is our Prince, and you speaking him like an idiot, don’t you dare again, otherwise I will kill you!”

Ginyu, who was a well-known team’s Captain, was bullied by a Saiyan guard.

“You idiots. We are from the Ginyu Force, the greatest force in the universe, being careful of your words!” Jeice said arrogantly, but after saying this, he felt dizzy because of hunger.

When this statement came out, everyone present was stunned.

The greatest force in the universe!

But the next moment, everyone was laughing.

“You two idiots are the member of Ginyu Force?” The head guards laughed and told his men: “Take away these two idiots and starve them!”

Ginyu and Jeice were taken away. Detained in a dark cell, the cell is full of energy. Vegeta believes that they are unable to escape from this place because of hunger.

Vegeta smiled and planned to go to the palace. At this time, he saw a guard coming at speed, and then he handed the detector to him with respect.

“What is it?” Vegeta asked.

“His Royal Highness, Lord Frieza’s call for you.” The guards responded quickly.

Vegeta thought that Frieza is quite well-informed, he has just landed to the planet Vegeta, and this guy is contacting him.

He hanged the detector on the ear, and soon Frieza’s voice came.

“Vegeta, I didn’t expect that you can compete with the famous Ginyu Force, good.”

“Lord Frieza, what instructions?” Vegeta didn’t understand what Frieza wants to say, so he directly asked.

“Send Ginyu and Jeice to me immediately, and then stay on your planet!” Frieza screamed, and after that, he cut the call very rudely.

However, Vegeta knows that with his current strength, it is impossible to kill Frieza.

Vegeta is thinking that if he fights against Frieza then he will defeat brutally and according to Dragon Shenlong, it will at least took 10 years to recover.

This damn time is too long. When I recover, the planet would be already destroyed.

Since Frieza going to keep him on the planet Vegeta, then he still has some time.

As listening to Frieza, it seems like he is not intending to destroy the planet Vegeta.

As for know Vegeta don’t want to kill Ginyu and Jeice. Otherwise, when they were in the spaceship, he would have thrown them out as astronauts.

Let them enjoy their two-three days in the cell.

After made this decision, Vegeta went to the palace.

But, as Vegeta reached the palace, he suddenly felt a strong breath in the palace.

Vegeta estimated that the person’s combat power is at least 50,000.

Vegeta was a bit puzzled. When did these Saiyan people to have such a strong combat power?

No, this person’s breath doesn’t seem to be like a Saiyan, even it’s a bit like an alien.

Vegeta hides his combat power at around 20,000 and enters the palace quietly.

“King Vegeta, Lord Frieza is very angry with your Saiyan arbitrarily, the consequences are very serious!” A gloomy voice came into the ears of Vegeta.

Vegeta looked at the direction, where the sound was coming.

A person standing with King Vegeta, who’s figure looks very familiar. Obviously, he was the person who just spoke.

After this person finished speaking, he turned his head to Vegeta side.

They two looked at each other.

How is this possible?

He killed this guy by his own hands. Then how?

Can it be possible that he also has an undead body?

Vegeta’s face was a bit pale.

Because he was not unfamiliar now with that person who is standing with King Vegeta. He remembered his long green hair, light green skin, handsome face, and also that he was destroyed by him on the earth. 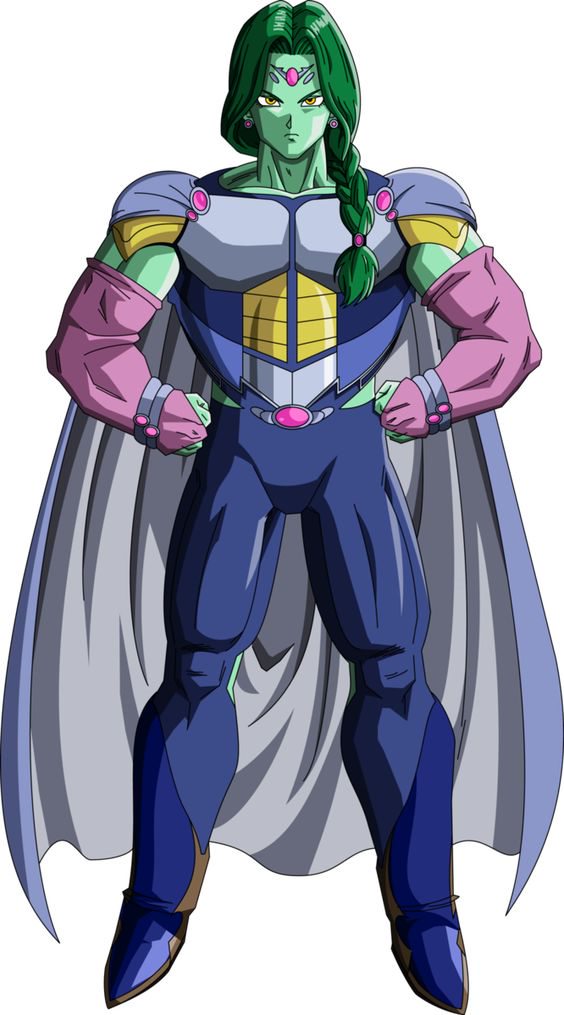 “Oh, isn’t this a little Prince? Has he come back from the earth?”

Obviously, that person also saw Vegeta at this time. Under a little glimpse, he smiled and said hello.

“Zarbon?” Vegeta said doubted because he was not quite sure.

After heard this, Vegeta took a breath of relief.

He turned out to be Zarbon’s twin brother, no wonder he looks exactly the same.

Unexpectedly, Zarbon also had a twin brother, which was not mentioned in the Dragon Ball Z.

“Little Prince, my brother is not good in conversation. In fact, he is quite rude. I hope you have not hurt him. Otherwise, I am not good at your father.” Saron said and laugh.

Although the words were polite, anyone can understand the actual meaning of those words.

After hearing this, King Vegeta pinched his fist but didn’t dare to speak.

After all Saron’s combat power is 50,000, which he can’t afford to offend.

“Okay, you and your father didn’t meet each other for a long time, so I won’t bother you.” Saron laughed and then coldly said: “King, Lord Frieza is waiting for you to come. I hope that King Vegeta will not let me down.”

“Ha ha ha ha, I will come over three days later!” Saron made a long shrill smile and then left the palace.