Hearing what Raavan said, Tiger curled his lips, as if he was disdainful, but he couldn’t hide the surprise in his eyes.

Because the most difficult guy in this group of chasing soldiers is undoubtedly the pirate who got a bounty of more than 100 million, who was defeated by Raavan with a punch.

You know, the bounty in the sea is hard to increase now. A pirate with a bounty of more than 100 million beri is very impressive. It can be regarded as a big pirate in the period when Luffy went to sea.

He also couldn’t imagine that the little ghost he wanted to play could suddenly burst out with such terrifying power.

Now, since the only difficult John to deal with has been solved, Tiger, who doesn’t need to worry about physical exhaustion and the exhaustion of fleeing for many days, is naturally relaxed, and only needs to solve the remaining ones.

So after taking a deep breath, Tiger, who was relaxed, let out a low drink:

With Tiger’s punch, the invisible air currents dispersed, and in a flash, half of the chasing soldiers fell under Tiger’s punch.

The remaining chasing soldiers saw that the situation was gone, and they wanted to escape, but how could Raavan give them a chance to escape?

Full of the magical effect of the fruit, suppressing the bloodthirsty impulse in his heart, Raavan is like a tireless machine, quickly passing in front of the remaining pursuers, each time with a fist, or a knee, or a With their feet swept across, the chasers who wanted to escape suddenly fell into a pool of blood one by one.

It only lasted a few minutes.

After a few minutes, the dark red on his body gradually disappeared, and Raavan, who was relieved of the fruit’s ability, could only feel the surging power in his body, as if he was taken out in an instant, and he didn’t even have the strength to stand there.

Fortunately, Tiger had sharp eyes and realized that Raavan was not in good condition, so he quickly stepped forward and supported him to avoid Raavan from being injured.

However, Tiger was not good at exhaustion during the multi-day running. After supporting Raavan, the two slowly sat on the ground. In this way, in the environment full of corpses and blood, there was silence for a long time, and Raavan, who had been ready to talk a long time ago, looked back at the silent Tiger, and then said in a loud voice, “Tiger, you… .Don’t you feel that I am a monster?”

Recalling what Raavan looked like when he was fighting, and thinking of Raavan’s horrible killing intent when he ate the fruit, Tiger grinned casually and said: “It’s nothing more than the power of the fruit, what a monster.”

“Then you don’t want to know why I ate the devil fruit?”

Well, I made up the reason for nothing.

Looking at Tiger with black lines, Raavan was completely choked by his answer.

Originally, the devil fruit was not so easy to obtain. Raavan made up the reason, and said that the Celestial dragon took himself as a plaything and gave himself a devil fruit at will, so he became a fruit capable person.

It’s all right now, no reason is saved.

Raavan, who didn’t need to lie to Tiger, suddenly became more relaxed. The next thought was to quickly use the first awakening opportunity given by the system to see how his fruit ability changed after awakening.

Also check the bodies of these chasers to see if they have brought Beri on them.

Didn’t John, who had a bounty of more than 100 million, say?

As long as you get Tiger’s head, you will be rewarded. Surely these guys must have brought Beri?

With enough Bailey, buy some suitable materials in the system store, presumably the second awakening of Fruit is not a dream!

Do it when you think of it, Raavan has always been a combatist.

Especially with the hope of a second awakening before, Raavan, who had forgotten his exhaustion, got up and walked towards the bodies of those chasing soldiers, because the fruit ability was relieved,

Lost Shura’s instinct, faintly disgusted with the smell of blood, Raavan was clutching his nose and began to look around. It is a pity that on the dirty corpses, except for the clothes and weapons soaked in blood, there was nothing else.

Ask the system whether you can sell these clothes and weapons in exchange for Bailey.

After getting a negative answer from the system, Raavan was faintly disappointed. On the contrary, Tiger stared at the surprise looking around there with interest, and curiously asked: “Little devil, what are you looking for?”

After sighing, Raavan replied: “If there is Beri, we will be able to relax in the future. At least we can eat well and live well. This way we will have the strength to deal with those chasing guys!”

As he said, Raavan kicked the corpse in front of him fiercely, and said, “Unfortunately, these guys are poor ghosts, and they don’t have any Beri!”

“Boy, you really are an idiot.”

Tiger stood up, patted the dust on his butt, and said: “Those guys come out to hunt us, can they still take Bailey? Go, let’s go and see on their boat!”

Sure enough, I was an idiot, I forgot to go to see on their boat!

He patted his forehead and cursed secretly, Raavan silently followed Tiger, wondering if he was mentally sluggish, even such a simple question.

It didn’t take long before the two came to the coast of the island and found the group of ships chasing soldiers.

Walking quickly towards the ship, Raavan was full of expectation. Only Brother Tiger looked at the hoof prints of the Nine Heavens Flying Dragon printed on the black flag on the ship, and his face turned dark.

And when Raavan boarded the group of chasing ships, he finally understood why Tiger’s face turned black.

On the empty ship deck, there are densely packed cages, and the few people in it are either dying old people, or girls who are tragically ravaged and about to die, or their bodies are covered with whip marks, occasionally showing several places Bones, a teenager who was tortured to death.

Obviously, these were slaves who wanted to escape but were hunted back.

Looking at the cruel scene in front of him, Raavan’s face became pale, because he imagined the fate of himself and Tiger being hunted back, and secondly the evil deeds of the angry dragon and his minions.

But when Raavan wished to kill all the Celestial Dragons and their minions to vent their anger, Tiger next to him suddenly gave a light “Huh”.

“Someone is still alive, but there is no one who has been tortured to death. Let’s go and see!”

“There is something called Haki, you little devil will not understand.”

Curious eyes were projected on Raavan once again. This is because Tiger became more and more curious, and even Celestial Dragon had to order Raavan to be captured alive.

But in the end Tiger still did not ask, everyone has their own secrets!

Raavan didn’t think so much. He followed Tiger and walked into the cabin in front of him. When he fixed his eyes, he saw a young girl in a pink dress with her hands and feet tied up with chains kneeling and sitting there.

Looking at Tiger’s appearance, Raavan knew that the job of saving the girl had to be handled by himself. What if Tiger scared the little girl?

Unexpectedly, the girl suddenly saw the fierce-looking, burly Tiger in front, she didn’t mean to be afraid. Completely ignoring Raavan who wanted to come to comfort him from the rear, the girl stared at Tiger with tears in her eyes. She was actually crying and begged: “You… you are Tiger? I am Hancock! Please… please, hurry up and save my two sisters!” 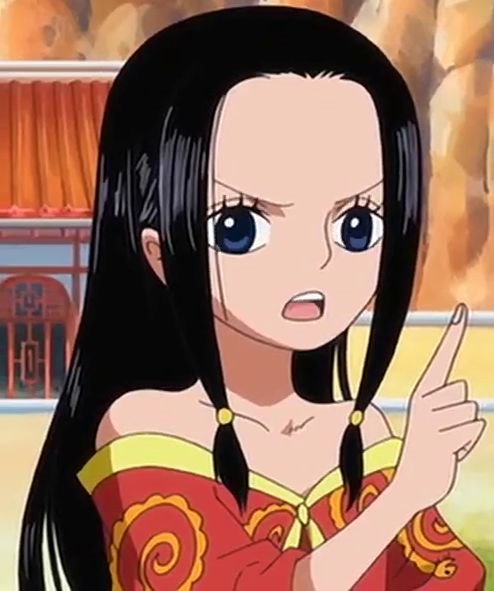 My peach blossom is here!