After that, Victor asked Brock to take the younger brothers back to their den, he did not worry about these people running away.

Then he walked alone towards the cabin where the drinker said Logan lived in. The closed door in front of him told Victor that Logan was not at home at this time.

However, this did not affect Victor’s trace of him. With the beastlike senses, the whereabouts of the other party could be seen.

But the moment he saw the other party, the other party seemed to discover his presence, and suddenly started to accelerate and turn, trying to get rid of Victor.

This attempt was obviously futile. The distance between the two was getting closer and closer, just when Victor was no more than three meters away from each other.

A clear gunshot rang through the forest. It turned out that when Victor was about to catch the opponent, the opponent suddenly turned around and hit Victor with a gun in his hand.

Victor, who was suddenly attacked, was caught off guard and was hit directly in the chest. The whole person flew out, and there was a bloody flesh on his chest.

It turned out that the shotgun in his hand was actually a trench gun, or another name that everyone is more familiar with: Shotgun. That is what is commonly known as ‘spraying’.

This thing is a scum to shoot from a long distance, but in close combat, it is the existence of the king of panel damage.

“Cough … damn, who the hell are you? Because the use of weapons to sneak attack is not the style of James Logan Howlet.”

Because the other person was wearing a cloak and his face was covered by a hat, Victor, who could not recognize the other person’s identity, had to control the recovery of his wounds, and began to talk as if he was dying.

“I just want to ask what the hell you are, why do you know the name of the damn ‘beast’. And what is going on with your face?”

Just when Victor was puzzled by the cape’s words, the other party took off the hat, which he wore on his head, and revealed a face. which is 80% similar to Victor’s.

Victor, who guessed the identity of the other party, was shocked at this time, which smashing his fragile little heart.

“You actually know my name? I’m getting more and more curious about your identity, but now, I will let you die!”

When Dog was about to make another shot to Victor, Victor jumped up and knocked him down, and shot the shotgun out of his hand.

Unexpectedly, Dog was knocked to the ground, and then he found that all the wounds on Victor’s body had disappeared, and his claws were extended.

Although Dog was knocked to the ground, he didn’t lie down and waited for death. Instead, he climbed up again and furiously counterattacked towards Victor.

Victor, who originally thought he was just an ordinary man, was caught off guard and was hit with a set of punches, which knocked him down on the ground.

“Damn! I knew it was not that simple.”

Victor, who was hit with a heavy punch, turned and drove back Dog, then started to take this half-brother of Wolverine seriously.

In fact, the self-healing factor of Wolverine is not completely inherited from his mother, but the result of the genetic fusion of his parents.

His mother’s bloodline gene gave him the ability to quickly recover beyond ordinary people, while his father inherited his wild animal instincts and strong physique.

The reason why Dog can easily trace the whereabouts of Logan after a lapse of many years is because he also inherited his father’s beast instinct and strong physique.

He want to suppress Logan and beat him only because he did not have a self-healing factor, he alwayes lost to the angry Wolverine.

At this time, his battle with Victor appeared to be slightly down. Although they were partly up and down in terms of strength, in terms of combat skills, although Dog was often fight with Wolverine, but he was unable to fight with Victor, compared with the skills, which he have after practicing in the battlefield in most years.

Therefore, after Victor took it seriously, Dog gradually fell into the downwind. His every move would be accurately blocked by Victor or counterattacked by the flaw.

Even if Dog successfully hit Victor, the damage he caused was quickly healed by Victor’s self-healing factor.

In the end, when Dog Logan, who was in a bad situation, he wanted to turn around and run away, Victor grabbed the flaw and overwhelmed the ground because of the large amount of physical energy, and tightened his neck.

This time, his opponent is no longer ‘Wolverine’, and naturally there will be no green plums and horses running out to insert a leg to save his dog’s life.

So, in the end, his cervical spine was severed by Victor, and then Victor kill him.

“Huh ~ Huh ~~! Since Dog Logan is here, it means that the Logan should also be nearby, but there is no reason for Dog to have not found him for so long.”

The fact that Dog will lose Wolverine’s trail is not without reason, but because Logan encountered a rather tricky enemy at this time: Wendigo.

After saying goodbye to the wolves, he had already prepared to start his new life, but he didn’t want to meet with any legendary monster. And Wendigo was in the snow forest at the junction of Maple Leaf State and the Federation.

This fierce creature with white hair live on cannibalism. 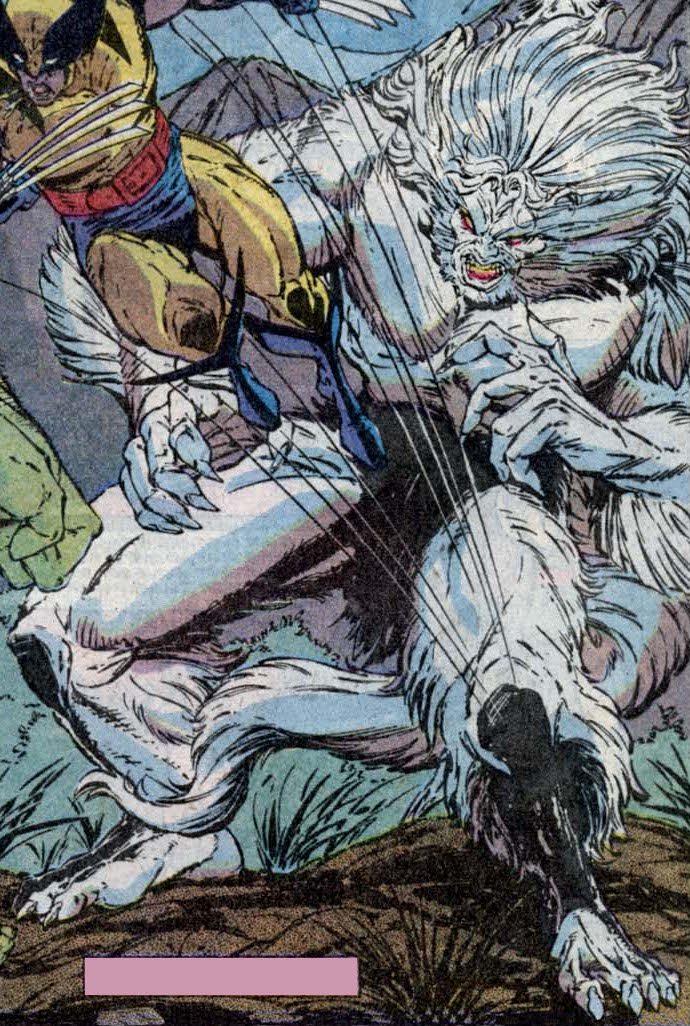 And the one Logan encountered was bigger and stronger. Of course, this also meant that he ate more people. So for several weeks, both of them were entangled in the woods, which caused Dog to return several times without success, and finally he had to find a place to stay in a local town.

Because Wendigo, who had not eaten because of a blizzard that lasted a week, finally waited until the snow stopped. He found a food soon after he went out: ‘Wolverine’ Logan.

Then he decisively sneaked over and wanted to attack the other party, and then he discovered! It doesn’t matter if it’s found, it’s just hard to carry human.

It turned out that he was almost stabbed to death by the Logan, but he also found that this human being is a gem for him. After he bit off the other person’s meat and eaten it, the other party feel nothing and his recover instantly.

If he can get the other person back into the nest, he will never worry about eating meat again.

The dream is full, but the reality is skinny. Wendigo soon found that he and the other are evenly matched. No matter the strength, reaction speed, agility and physical strength, both sides are equal.

The three bone claws, which protruding from the opponent’s hand, can easily pierce his skin and he have the ability to quickly recover from the injury. If it is not that they can recover by swallowing flesh and blood, it may have been pierced into a dozen holes. The place where the two of them are fighting always becomes a mess. When one of them is at a disadvantage, the other party will choose to evacuate temporarily, but will soon return to continue to struggle.

Of course, most of the time it was Wendigo who evacuated. Logan was troubled by Wendigo, but he couldn’t kill the opponent with a single blow, almost every time, and finally let the opposite side run away.

After killing Dog Logan, Victor looked at Dog’s body, which was lying on the ground, and suddenly felt that this person’s life was so bad. The first love did not love him, although he did not love his brother, but remember and care about him.

His father treats him as a servant.

And his only relative, his younger brother Logan, has turned against him because of what he did, but this is also his blame.

After sighing, Victor chose to settle Dog in peace. After all, after people dei, everything in the past is gone, even if he wants to kill himself, but he has already paid his life in the end, so he settled down to avoid being reduced to beast rations, and it was Victor’s last respect for this pretty good opponent.

In this way, when Victor, who buried Dog Logan, returned to the town, the old snakehead Brock and his younger brothers had been sent to labor by Tom.

In fact, when Tom took people to catch them, Brock was scared, thinking that he had helped the southern rebel spy smuggling out of the country, so the army came to arrest him.

The town has also entered martial law because of the arrival of the army. In fact, Victor’s plan is to recruit Logan directly if he agreed. If he want to fight, it is to catch people back after the fight and slowly adjust. And if Logan is caught back, then someone still needs to be guarded. After all, Logan can still be suppressed by the number of people.

As a result, Victor did not catch anyone at the end, so he had to let Tina and Tom take the team out of the town, but he did not leave together. Instead, he walked toward a large forest outside the town because he feel that Logan is not far away.

This feeling is so wonderful, although it is only the first time, but he knows, that is Logan. Because this taste is similar.