Raj was completely angry this time! I can endure being unfair, hurt, and insulted… these can be tolerated! But we must not tolerate others to say things to their family members! Especially when Augsburger said so loudly that he would torture all the relatives of Raj to death, even the children will not let go… The anger of Raj’s heart that could not be suppressed at this moment. His patience limit is completely broken! You can deal with me, no problem, as long as you have enough strength, even if you use a despicable method that is fine … but I will never allow anyone to touch my family’s single hair! For Raj, his partners are his family. and friends who he may know in the future, join the partner of the Death Pirate Group, will become his family. Regardless of the past or the future, Raj will never allow someone to threaten him with his family! “How did the pirate ship stop?” “Look the pirate is staring at us… his eyes are terrible!” “It must be because of the words of Augsburger just now .” he got annoyed!” “Is this guy not ready to leave? He stopped, is he trying to respond to the words of Augsburger?” Navy soldiers saw that the pirate ship has stopped. Especially when Raj faces them and looks into their direction. Their hearts start beating faster, and there is an ominous premonition. “Oh… Now you know what is the power of world noble? What is the use of being afraid.” Augsburg also looked that pirate ship has stopped. But he was so naive, he thinks that after hearing his threats Raj stopped because of fear. He was not aware of the cold killing in Raj’s eyes, and the dark clouds that were gradually overlaid on his head. “I am Dragon, the world’s most noble race!” Augsburger’s smirk smiled. “You offend me, it is equal to that you offend the whole world, this world will never have a place where you can live! ” “If you want to pray for my forgiveness, now sit on your knees, repent all your sins …… maybe I’ll just let you have your life, make you my slave!” now kneel down! Repent for your sins!” Augsburger’s shout with arrogance and with a high-pitched face. As a World Noble, he has never seen rebellious, let alone being insulted by someone and being smashed… This hatred, how can he so easy to forgive them? He has already made up his mind in his heart. As long as Raj succumbs for mercy, he will take him as a slave, and then torture him every day, let him suffer in pain! Only in this way can he eliminate the hatred in his heart! “Repent?” In Raj’s eyes, there was a hint of sarcasm. “You really should regret saying it, or you will have no chance!” The voice just fell, and Raj’s robe suddenly danced without wind and wind. Immediately, in front of Avishek and others, Raj’s body slowly floated up! “How did he flying?” “He can fly?” “What is he trying to do?” The navy soldiers were in awe. Avishek also did not know how Raj actually know to fly. Even though the body did not use any force, it flew up directly! “Raj, what do he want to do…” Avishek is not concerned with why Raj can fly, but what he wants to do. Rumble ~ ~ ~ the thunder of the sky start making the sound of a huge roar, it really shocked people’s hearts. The thick dark clouds rolled in and covered the sky… The clear sky was shrouded in the dark. In the clouds, there are lightning flashes from time to time, it is like swimming ~ walking in the dark clouds of electric dragons, claws and claws, making a deafening roar! The ocean began to stir up and move as if feeling the uneasiness of the mood of the ocean, even the diffuse air is so heart-rending! Raj’s body slowly floated up. The wind blew in and swayed his robes. Raj’s face was cold and his eyes were red. He stood proudly in the sky, like the gods between heaven and earth, overlooking the ocean! – On the right hand of Raj, a group of blue electric current suddenly emerged. The electric current is intertwined and flashing, and the blue electric power of this group is constantly increasing and getting bigger. they saw Raj raised his right hand, palm up, facing the sky. “In this world, if there is a kind of power that is considered as God’s power, there is no doubt, that is the Thunder!” “When thunders have enough power gathered into a huge electric current and when it falls from the sky, its power will destroy everything which it touches!” “And under the heavens, only one person is qualified to use this power, that is – God!” “I am not a god, you are not a so-called creation god. But today, I will replace God and carry out the final judgment for you!” “Let’s feel it, the power of the heavens and the earth, its name is called…” “Judgement of God!” 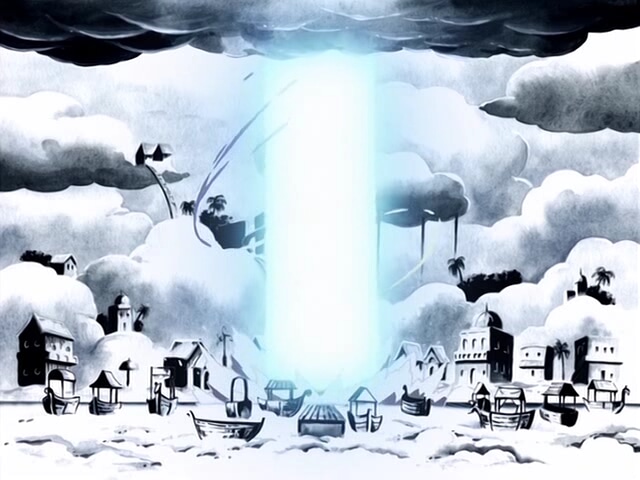 Raj’s voice is mixed with lightning ethereal, listening as if the really god is talking. ….. when he uttered the sentence “Judgement of God”, they saw the original turbulent world suddenly subsided. Even wind stops flowing. The world of hustle and bustle suddenly disappeared. The lightning flashing in the dark clouds suddenly disappeared. The next second – booming! ! ! ! ! ! ! A huge sky-light blue lightning bolt descended from the sky, drowning the entire Dragon’s luxury ship. The sound of the deafening sound continued to sound, and the waves rolled up because of the power of terror, and even their ship was shaken and uneasy as if they might turn over at any time. “This…” Seeing the fall of this scene, standing in front of the thunderbolt of the sky, I feel like an ant, full of 0.3 powerlessness. In his heart, there is no other emotion besides the shock. Is this really the power that human beings can exert? If I am also overwhelmed by such a lightning beam, can I still survive? What can I do in the face of such terrible natural power? At this time, the Rashmi and Gayatri, who couldn’t stand it, opened the door and walked out. The movement outside is too big. They are worried that Raj and Avishek will be in danger, and want to come out and see. Who knows that when they come out, they see that the lightning beam that almost covers the entire sky descends from the sky, and the horrible power makes their small face turned all white. “Is God coming?” Raj and Gayatri looked at the scene and muttered. .