Sanji beat that Navy Lieutenant Fullbody because he wasted his food.

After seeing that scene, Vegeta got confirmed that this guy definately reached this place with connections.

One of more problematic condition is that, girl with Fullbody is staring towards Vegeta. It looks like she didn’t even care about Fullbody.

Vegeta thought that maybe she recognized him.

Vegeta didn’t even know her name.

After Fullbody make joke of himself, she stood up, and directly went out.

“Give me the information about that pirate group.”

It looks like she is talking with the air, but suddenly a voice comes from her behind, and then it disappeared.

“Interesting boy, I will make you my next toy.” After saying that she walked towards the Navy ship, and planned to just go away. 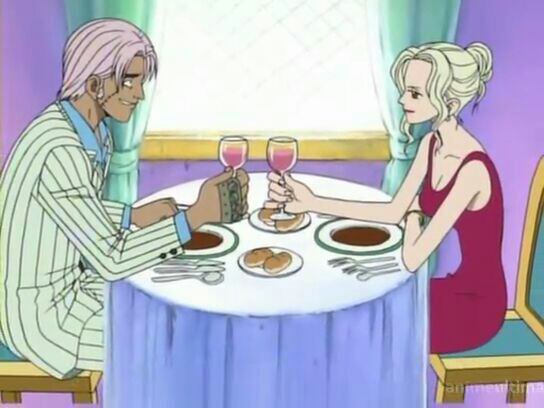 Vegeta didn’t about any of this. He is flirting with Kaya, and just when he thought about Nami, gate pushed opened, and Gin enters to demand food.

Vegeta remembers that now Krieg Pirate group is about to attack Baratie.

Vegeta used his Observation Haki, and found Krieg ship that is not far.

One more ship comes into his observation range, and that is Golden Merry.

Vegeta smiles and thought: It looks like Nami is in tensed state because of this. She must have heard those two idiots talking about Arlong.

Will I go early on to catch up? or just go with Straw Hats.

Naah, I will go early on. I want to test my new increased strength, so I will go first.

“Hey Zoro, I am going to Cocoyashi village, tell Luffy to go there. I think Nami village met with some problem.”

“You solve the problem of this Baratie Restaurant, I will try to solve Nami’s problem.”

“Well, what problem? Do you need my help?”

“Naah, just let Luffy pick me and Nami from Arlong Pirate village. We both will wait there. And Nami took our boat, so you need to find a new boat to reach that Island.”

Kaya also detected the behavior of Nami, and Nami saved his life from the pirates, so how can she just sit and see Nami in problem.

Vegeta nodded towards her.

After saying that, Vegeta pick Yosaku, and went out.

He already found the place when Baratie Restaurant keep his boats, so he pick the boat and went towards Cocoyashi Village.

Yosaku didn’t care about food too much, when Vegeta promised him to give him Arlong’s bounty, he is almost flying in heaven.

Vegeta didn’t have to travel fast, because Nami can handle things for some days, but Kaya is just too tensed, so she pester Yosaku to drive fast.

Yosaku is handling the boat, Kaya is just sitting and reading a book.

Vegeta is training as always.

He can only use these 3 ability which didn’t affect others too much.

And he also can’t consume too much of his strength, because currently only he is the fighting player on the ship.

So, after consuming half strength, Vegeta took his turn to rest.

It took around 15 days, just to reach Cocoyashi village.

His panel value also increased because of his this half month exercise.

Because of Cat fruit ability, his agility goes off charts.

One more thing surprised Vegeta is that he doesn’t need time to copy Kaya’s devil fruit.

Kaya was already a kind girl, so when she heard her story, she even fell ill.

To save Kaya from that state, Vegeta forcefully fed the devil fruit he decided to give Nami.

When Kaya tried her powers, she half turned into a cat. She is like a cat-woman in DC comics.

She looks really damn cute. After seeing Kaya in that state, Vegeta mood swings too many times, but control it.

They landed on Cocoyashi village, and found lots of house turned around.

“Hey, who are you? I have not seen you in this island before.”

A fishman walks towards him.

“I come here to kill Arlong. Do you know where he is?”

What Vegeta didn’t know is that, Nami money was already robbed by Navy just now.

“What? You want to kill Boss…”

Before he can finish his sentence, he was already been killed by Vegeta.

Vegeta opened his observation Haki to find Arlong park, but he find something else.

Nami and Nojiko is surrounded by Navy soldiers, and some of the soldiers are digging treasure from her orange park.

“Whoops, we are little late. You both follow me.”

After saying that Vegeta used his stealth step to achieve his fastest speed.

Stealth steps with the amazing strength of Vegeta, it became much more powerful than Navy Six Shave.